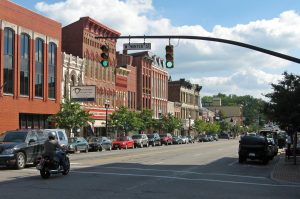 Long before the City of Delaware came into existence, Mingo, and Shawnee Indian tribes lived in the area and settlements were established where the future town would develop. In 1804, Moses Byxbe arrived in central Ohio from Berkshire County, Massachusetts. He had acquired a large number of land grants which were part of the United States Military lands, given in payment to Revolutionary War soldiers. In the spring of 1808, Byxbe laid out a town on the east bank of the Olentangy River but a few days later changed his mind about the most suitable location and platted the town on the west bank. On May 9, 1808, Byxbe filed or, “platted” the, “plan of the town of Delaware,” marking the real beginning of the present City of Delaware. Byxbe (1756-1826) was a man of exceptional energy, courage and drive who shaped the City of Delaware’s future during its formative years. He accomplished a great deal in a little more than 20 years on the Ohio frontier – Delaware’s founding and planning, growing a local economy, the enlistment of capable civic partners, and even an attempt to locate Ohio’s capital in Delaware. The tough-mindedness that served Byxbe well in Delaware’s early days also drew its share of detractors, but there is general agreement that Byxbe excelled at attracting high-caliber settlers who formed the basic population upon which Delaware was founded.

Today, Delaware remains a vibrant city with numerous educational and occupational opportunities. In 2000, almost twenty-five thousand people called the city home. Ohio Wesleyan University continues to operate in the community. In addition, The Ohio State University now offers classes in the city. Numerous manufacturing establishments operate in or nearby Delaware. Among the most important are Honda, American Showa, PPG, Nippert Company, Trus Joist, and the Liebert Corporation. Numerous employment opportunities exist in Delaware and in its surrounding communities, but many residents commute to Columbus. Although they work in Ohio’s capital city, these residents prefer to live in the smaller city of Delaware. Delaware also is famous for hosting the “Little Brown Jug” each year at the Delaware County Fair. Begun in 1946, the “Little Brown Jug” has become one of the premier races in the harness-racing triple crown. It attracts more than fifty thousand people to Delaware every fall.